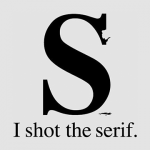 Let’s take a quick journey through one of the most dogmatic and unchallenged topics in the marketing world: typography. Or if you’re so inclined: font choosin’. Consider this part rant, part primer on fonts.

For design nerds, there’s nothing better than a nice flame war about which fonts are best. It’s a frivolous exercise and usually winds up with everyone agreeing the Papyrus and Comic Sans suck. Well, everyone except apparently James Cameron. (Commence flame war!)

Contrary to what marketers will tell you, headlines don’t need to be Trebuchet MS and body copy doesn’t need to be Georgia (or some other specific formula). That’s all nonsense and has more to do with improper testing, gut reactions and dogmatism than actual results.

Typography can stoke actions and feelings, because fonts and the way we treat them, can actually make us have an emotional response. Like colors, fonts act like triggers. They allow us to convey meaning, feelings, intentions, etc., both directly and indirectly. And if there’s one thing that you get knocked into your head when studying design, it’s to fully realize how your typography can affect the reception of your work.

Example: It would generally be a bad idea for a funeral home to Comic Sans or another goofy handwriting font on their materials. It sets completely wrong expectations and doesn’t convey professionalism that is expected from such a business. Like-wise, using grungy type and making letterforms bleed off the page would be great for an indie band, but the mortician would probably get their fair share of (extra) odd looks…if they managed to get people in the door.

This isn’t some big revelation. After all it’s no secret that our society uses visual cues to determine things about everything. And everyone. A recent study highlighted in the Journal of Research in Personality, showed that with 90% accuracy, test subjects were able to judge personality, income, character, politics and more, based solely on a picture of a person’s shoes. Nothing more.

Fonts work the same way. Setting the proper tone, conveying the proper message, personality, etc. In fact, an experiment was run showing that the font Baskerville had a direct correlation with making people feel that a particular claim being made was true. That same experiment also showed that Comic Sans negatively impacted respondents into assuming that the claim was false.

A Primer and Application

Most designers will say that’s there 2 types of fonts. Serif and Sans-serif.

Serif fonts have…serifs. Those little bugger details on the ends of certain letter-forms. These fonts are generally considered easier to read. These fonts can be split into 3 main sub-classes: old-style, modern and slab. Each has a distinct look and feel. Old-style serif fonts have a distinct feeling of being professional, credible and “stuffy”. Slab serif fonts on the other hand are made to appear more contemporary as the letter-forms usually appear similar to sans-serif fonts.

Sans-serif fonts have no…serifs. [stating the obvious] They look more modern and are considered by designers to be more “clean”. A term of art that no one has successfully convinced me has any real meaning! (I feel all fonts not made to be specifically dirty or ragged, qualify as “clean” in my book.) Sans-serif fonts are more closely associated with being young, contemporary and “cool”.

But these terms aren’t exactly solid. When it comes to determining whether a font matches the personality and tone you want to communicate, it largely depends on context. Old-style fonts can be just as contemporary and fun when used in the right way and combined with the right treatment. Just remember that fonts aren’t single-purpose instruments. Well, most fonts…

I prefer to say there’s a third big classification of fonts: Statement fonts. (I don’t count cursive fonts…I loathe them. Period. Although I guess most cursive fonts are really statement fonts…but I’m going to arbitrarily stick to my guns here…)

A statement font might also be called a “fantasy”, “niche” or “novelty” font. By and large these fonts are over the top, cheesy and exceedingly low-quality. They generally include “holiday” fonts or fonts that intend to have a very specific purpose, like a stereotypical “chinese” font or something with puppies and hearts. You know the type. They usually make their way onto the walls outside elementary school classrooms. On the whole, they should be used sparingly. But in the right circumstance, fuggetabbout the rules. YMMY!

For the most part, there are a few “rules” to live by:

Remember, fonts usually communicate much the same to most people. There’s not a lot of mystery here. Depending on how they are used, the proper font can make or break the attitude, tone or efficacy of a design. Finding the right tool for the job isn’t always straight forward. Knowing your audience and probably more importantly, knowing how you want to present yourself, is the most important factor in determining proper typography to convey your message. It feels weird to you, it’ll feel weird to everyone else! Oh, and don’t use Times New Roman.

And that’s the story of why you should hire a designer.

“I Shot the Serif” graphic by Tom Gabor